skip to main | skip to sidebar

Got the itch again. Anyone watch to trade?
Posted by Cardsplitter at 6:36 PM 2 comments: 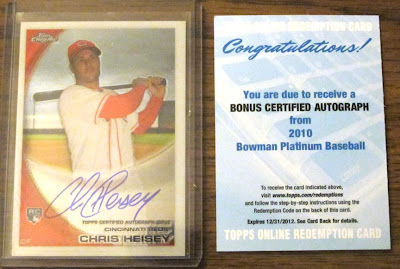 Got a mailer in the mail today, with my Bowman Platinum redemption in it.
Sort of. Instead, a 2010 Topps Chrome Chris Heisey auto slid out, with a little note telling me the Maurico Robles bonus refractor auto was taking too long to get.
I don't really feel like they are equal. Sure, Heisey is a bona-fide major leaguer, more or less (12 homers in 83 games) but it is not a refractor bonus auto. Plus, a box of Platinum is about 100 bucks, while you can find boxes of Chrome pringles in dumpsters.
Oh well. What do you think? At least it fits in my Mutant Chrome set...
Posted by Cardsplitter at 6:24 PM No comments:

Ok. I am behind in my sending of cards. The following can expect some cards to show up in their mailboxes later this week or early next:
AdamE from Thoughts and Sox
Nightowl from Night Owl Cards
Julie from Things are Funner Here
GRCL from Garvey Cey Russell Lopes
Shane from Off the Wall
Jack from Pursuit of Red Sox/'80s.
Mo Sexy from ....?
Posted by Cardsplitter at 5:42 AM No comments:

I had a little walkin' around money a while back, so I got a box of 2009 Ginter. I have ripped an '07 and '08 box and I have the '10 set, so I figured why not fill the gap. Plus I could get some minis for my amalgamated ginter mini set.

Except all the minis I pulled kind of sucked. Geronimo is pretty cool, as is Negro Leaguer Frank Evans. He will find a spot in my set for sure. Probably. You never know. The fairy is cool, and a creature I don't have. 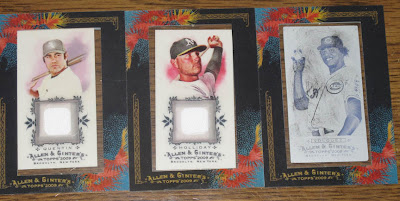 I ripped strategically so I could have 1/3 of the box for my son and guarantee a hit. The hit in the first column was third from the bottom. So was the hit from the second column. So I put the third column away. As I was finishing off the second column, out pops a printing plate.
Poop. Was that hit three, or a bonus? Will my son pull a relic/auto/rip in 10 years when we rip the rest of the box together? I hope so.
Relics of Carlos Quinten and Matt Holliday didn't really light my fire, but the Edison Volquez printing plate is pretty cool, I guess. It is the printing plate for a short print, which is kind of funny. It is only the second plate I have ever pulled. It is the black plate, complete with schmegma.
Anyway, I like the design of '09 Ginter, especially the minis. I will probably eventually see how close I am to the set sooner or later.
All of the above are for trade, except whatever fits in my Amalgamated Allen and Ginter Miniature Card Set.
Posted by Cardsplitter at 8:14 AM 2 comments:

Allen and Ginter was one of the things that got me back into the hobby. I loved, and still love, the idea of historical figures and weird things mixed in with my baseball cards. And minis. Man, I love minis. Especially parallels.
Some people hate Ginter. Differn't strokes fer differn't folks. I don't really the undercurrent of "I don't like it, so your stupid" going on, but perhaps that is a sign of the times. 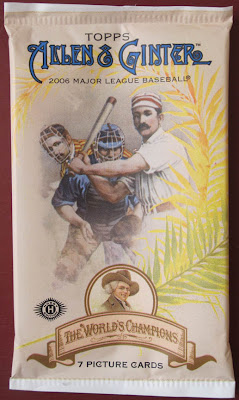 The premier edition of A&G is my favorite design, and the first year packaging is pretty good too. The Old Planter is featured prominently, as is some fancy 1920s typeface action across the top. 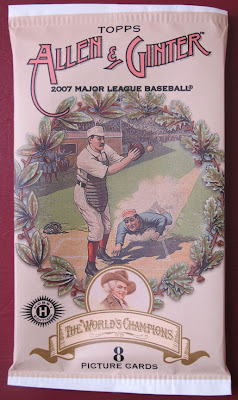 2007, my second favorite design (probably because it is so damn similar to the 2006) and the packaging has some good Currier and Ives type action going on. 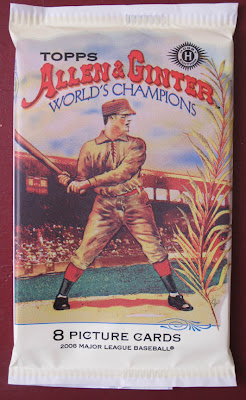 I think 2008 has the best minis, but the cards sort of fall off a bit. Some of the pictures are really weird, like super oversharpened in Photoshop. The packaging has started to look less old-timey to me. So long, Old Planter. 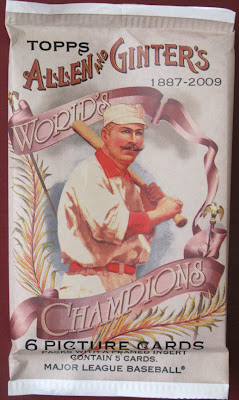 The 2009 packaging has the old time cheese going on, with a mustachioed Minty Beans making his first appearance. 6 cards though, you cheap bastards? 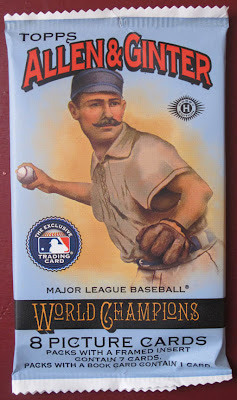 2010 is a very sort of mature design. A bit too much verbage, I feel, and that stupid exclusive trading card logo ruins any old timeyness left. If you slapped a picture of Albert Pujols in Minty Beans place, it would be 2011 Topps, essentially. Sort of.
So in terms of actually telling you what is inside, I would say that 2007 and 2009 do it best. The best overall design, I think, is probably 2009. 2010 is the sell out design, a bit slicked up for a fringey, but popular, product. Kind of like the design of the cards, come to think of it.
Since we have seen almost every aspect of 2011 Ginter months and months before it will appear on the shelves, the last thing we will see are the wrappers.
No one cares, but I always find the packaging and presentation of a product to be interesting.
Posted by Cardsplitter at 6:33 PM 6 comments:

Send Me Your Junk Wax Needs

Now I feel bad. About throwing out those cards I threw out. I was almost going to throw out an entire box of 1993 Donruss and Score.
But now I am overwhelmed with guilt.
So send me your junk wax needs, and I will personally go through my collection and help you fill out your sets or team needs.
Do it now, because an entire box of 1993 Donruss is hanging in the balance.
(my son already has about 40 cards floating around the living room, and my wife is starting to not find it very amusing.)
Posted by Cardsplitter at 8:10 AM 3 comments:

The Cards I Threw Out 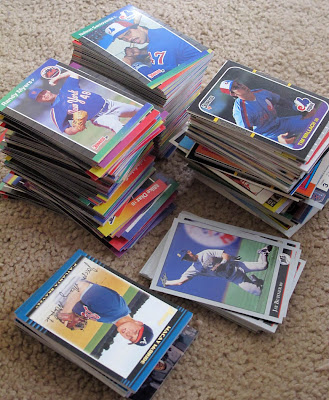 So I open the cupboard where I have several stacks of cards waiting to be organized the other day, and a sort of funny feeling swept over me.
What the hell am I going to do with all these cards? I looked through some boxes; more unsorted cards. Cards of players I don't care about, on teams I don't like (a relative term, I only don't like one team, if that makes any sense. The rest I don't care about) of players I don't have any feelings about one way or another.
I grabbed a few stacks and brought them up stairs with the intent of sorting them out. The stacks I grabbed were mostly 1980s junk wax, plus some Bowman from the late 1990s.
I began to sort through them. And realized, what the hell am I looking for? I have all the Red Sox I need from 1989 Donruss. And I have all the hall of famers from 1989 Donruss.
So I picked up the stack, and walked over to the garbage can, and threw them out.
Boy did I feel guilty as I looked at those poor, innocent cards sitting there on top of a dirty diaper, the point of no return, garbage can wise.
I should have sent them to some poor kids in Africa that didn't have any baseball cards. Or I could have made a collage to decorate my son's wall. Or I could have given them to my son. He likes baseball cards. He is two, and not very discerning about that sort of thing.
But instead, I threw them out. I am a bad person.
Ah hell, who am I kidding? No one wants 1989 Donruss. No one.
Has anyone else lost patience organizing their collection and culled the stacks this way? Or am I really a bad person?
Because I have my eye on you, stack of 2008 Topps Heritage commons.
(on another note, does anyone want my stack of 2010 Heritage? Because I really don't want those cards...)
Posted by Cardsplitter at 7:22 PM 5 comments:

I get my cards from

Cardsplitter
Why cardsplitter? Half of the packs I buy get put in a box for my son, born in March 2009, to open when he is older.